This post first featured on Meet Other Mums on 21st October.

Recently my middle child, B, went to the birthday party of one of the little girls in his class. He got the invitation over a week before and had been really excited about it. So much so that he talked about it every day and kept asking when it was Saturday, so that he could go to the party. To let you understand B has only been to one other ‘proper’ birthday party before; when he was at nursery. The other parties he has been to have been for family members, so there are a few familiar faces and usually me and some other familiar adults. He loves to play, to have fun, to run around, to bounce on bouncy castles, to dance and he loves soft play. Most birthday parties should be a piece of cake then!(🎂😂) Not for B. He was so excited right up until we walked into the party room. He even wrote the card and posed outside the building for a photo. 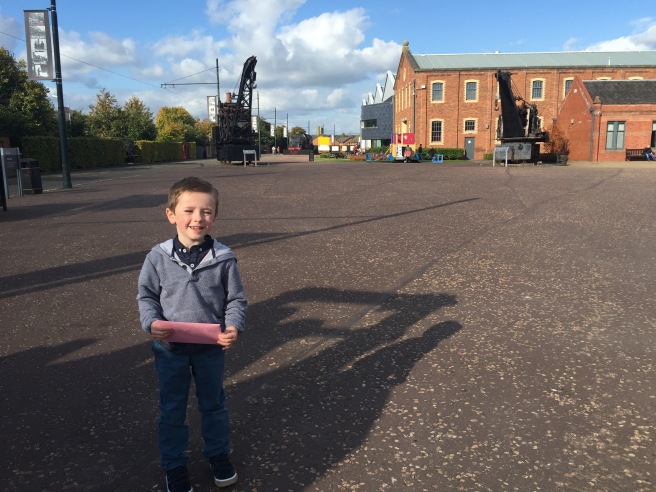 Once we walked into the room it was an entirely different story. He was wrapped round my leg, head bowed, cheeks red and voice low and mumbling. I could see tears about to well up in his eyes and the look of fear in there too. The strange thing was, many of the kids he knows from school. He could tell me many of their names and wave at them if they spoke to him, but he couldn’t just run off to play with them. It was like he was frozen to the spot. He has never been an overly confident or outgoing child. He took a while to settle in nursery and despite being excited about starting school, he cried going in each morning for a couple of weeks.

I tried to encourage him to go forward and join in, took him over to the table where kids were colouring in masks, tried to engage him in conversation with some of the children I recognised he knew, tried to get him to play on the soft play cushions with the kids there, tried to get him to climb on board the mini wooden pirate ship; all in vain. He stayed wrapped round my leg or holding onto my arm and begged me not to leave him. Other than the friends of the mum hosting the party, no other parents had stayed. They had all dropped their kids off and gone for tea or some other lovely kind of respite!

I thought maybe if I stayed for the beginning he would settle in and I could slip off, but every time I moved even slightly out of his eyeline he looked around for me in a panicked fashion! I ended up there for the duration. The other mums probably thought I was a bit crazy, since this was the first time I had met them and I was the only one who stayed. I didn’t have the heart to drop him in at the deep end though and I didn’t want it to put him off parties for life or for it to result in him crying the whole time and wasting the party for everyone else.

Eventually he coloured in a mask and said hello to a couple of others. He stood next to some children playing on the soft play cushions and sat on the floor for instructions from the party leaders. He was reluctant to join in with musical bumps and when I finally encouraged him I was devastated that he was too shy and hesitated to sit down, meaning he was out on the first go! The tears fell then and I had to work hard to quieten him before his friends noticed. Strangely the kids who cried the most during the party were the boys. The girls all just seemed to get on with it! He looked anxious the whole time and certainly didn’t look like he was having a great time. However, in the car on the way home and for the rest of the evening, it was all he would talk about. He told me that he’d had a great time and it was the best party he’d ever been to!

Anyway, bit of a long way to get here but it made me wonder if this lack of confidence or shyness is in a child’s nature or does it come about through their experience of life? Is it a bit of both? Have I failed him in some way and made him feel this way? Have my oldest son J’s needs, and lack of ability to help him out in situations like this because of his autism, had an impact on B’s skills and how he copes? Is there a way I can help him to feel more confident and able to join in?  I was a shy child and I’m not an overly confident adult. Does he get it from me or have I somehow inadvertently shown him to behave this way?

Any ideas on how to help him through this anyone? Is it truly just his nature or is nurture responsible?

6 thoughts on “Confidence – nature or nurture?”